This post is cross-posted from my Kickstarter campaign for the show and was originally published on August 3rd, 2018.

Halfway is a word, right? So I'm saying we're thirdway there - Red Squiggles of Misspelling Shame be damned!

Thank you all for your early support of the project. I've done limited outreach to key folks so far and we're already over one third of the way to our primary goal of $3,300. Remember that my ultimate goal is around $11,000, which will be enough to support a fully produced recording. But even a little over the top - say $4,000 or $5,000 - will be enough to add some nice enhancements to a few key songs.

The best way to support this project for free is to support it with other people's money by sending a friend here. Tell them how excited you are about the show and the CD and that you think it's a great way to impress your friends and be popular. Have them click this link and pledge generously! https://www.kickstarter.com/projects/rmartinmd/miss-isabella-rainsong-and-her-traveling-companion?ref=7m2o37

If you happen to know folks in the Winter Park / Orlando area, I'll be performing a one-hour version of the show three times at the Florida New Musical Festival August 23-25. Check it out at http://winterparkplayhouse.org.

One of these things is not like the other...

Check out the picture and feel my pain. 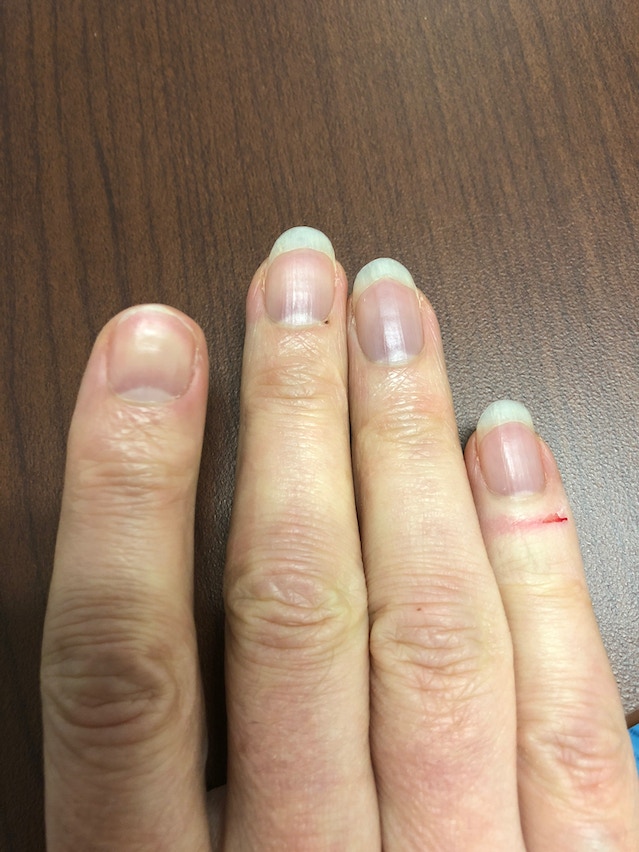 No, not the cut on my pinky -- a mere flesh wound! I'm talking about that first fingernail. I broke it weeks ago -- really did a number to it. I've been nursing it back to health for more than two months and was finally getting it back in shape when it broke again at a weak point (from the prior damage). Oh, boo-hoo, you say. True, normal people don't care that much about such things. But I do almost all my guitar playing fingerpicking style and have had long nails on my right hand for about 30 years. It's really important that they have a good shape, no snags, and the right length or the plucks sound different. If I don't have any mishaps, It will be in good shape for the show. Otherwise I will do an acrylic nail, which works well enough, but doesn't sound the same to my ear.

Instead of breaking my nail, I kinda wish I'd broken the whole finger instead. I know, this statement makes you concerned for my overall mental state. But you may have also noticed from that picture that my index finger curves in a little. Don't know why. It's the same on my left hand. But that little curve makes bar chords (placing your finger across all six strings behind a fret) harder -- it dulls the bass note. So I've always wished that one day I broke that finger so I could have them reset it a little straighter. I'm too chicken to do it myself. But before you get the clever ideal of hiring a thug to do me a favor, Please wait until after the August show... then after the October show... then after I'm finished recording... I should be free sometime in 2047.

But enough of my first-world problems. Thanks for being a part of this journey with me!